The meaning of “alternative” music has changed a lot in recent years, and perhaps nobody represents the recent shift in its definition than jxdn — born Jaden Isaiah Hossler, a viral superstar turned pop punk singer whose meteoric rise is something any mainstream artist would be proud of. As a protégé of the Morpheus of punk rock: Travis Barker, jxdn’s career started by posting videos on TikTok that quickly racked up millions of views.

“I didn’t really know what I was doing or what anyone was doing. But I just went for it because it was something brand new and it came to my attention very quickly that you can make money on it,” he says. He threw himself into the video-sharing platform “100%, all in”, joining the infamous content collective, Sway House with other creators and becoming a global star on the app.

jxdn already achieved unimaginable success through his videos as a teenager but then, halfway through a Juice WRLD concert, he found his purpose. He realized that what he wanted to do was make music. So, in 2019, jxdn approached producers about putting together a track: “I had no knowledge of anything that I was doing really. I just came in one day and was like, ‘yo, I want to do a rock song,’” he tells me over Zoom from his home in LA. “The producers I was working with kindly let me try my best. And so I tried my best,” he says. The track was “Comatose”, a pop punk-style effort that sampled Travis Barker’s drumming. One of the track’s produc- ers, Russell Alia, happened to be a friend of Barker’s and forwarded him the track. That quickly led to Barker calling jxdn’s team, inviting him to sign as the first art- ist on his own DTA Records, a joint venture with Elektra Music Group. “It all just all happened so fast,” says jxdn. “It seems like it was a whole art puzzle and each piece just kept falling into my hand when I needed it. I’m really, really blessed from everything that’s happened to me so far!” 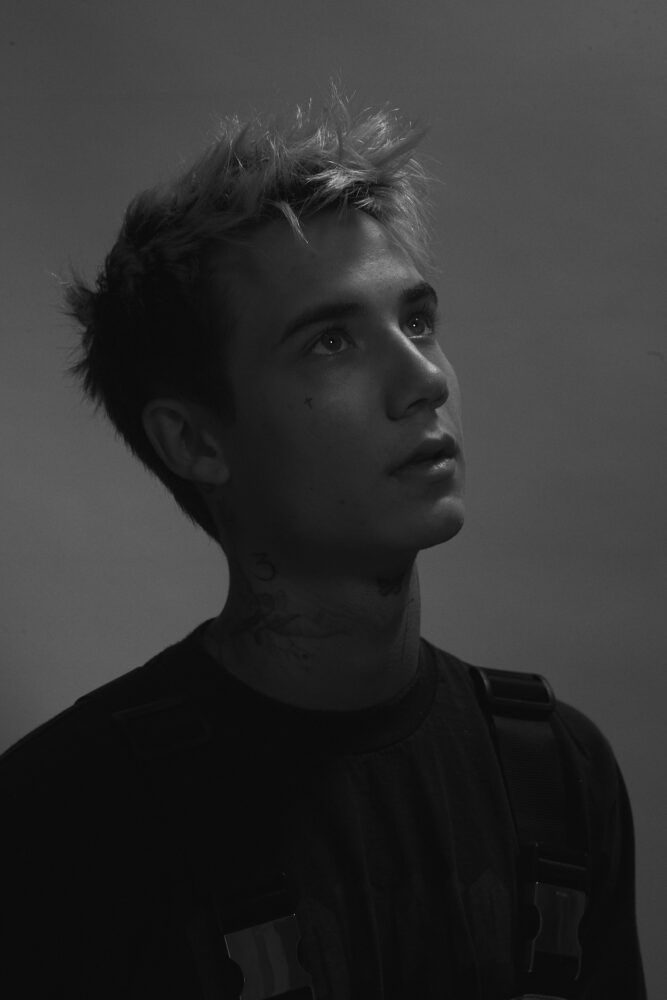 When we speak, he’s about to head out on his first tour with Machine Gun Kelly, 36 different shows in 50 days. He’s fresh off the back of a handful of successful performances, including Chicago’s Lollapalooza festi- val, and he’s got a taste for playing in front of crowds.

“I think that live music is the best thing you can do for somebody, and the music I sing just so happens to be the best live music. The lineups for my tour are insane. We’ve got me, KennyHoopla, and Machine Gun Kelly, so it’s just going to change the world!” he exclaims. “I know it’s gonna change the world for the better.”

While jxdn’s music is firmly pop punk, he him- self skipped the classic teen angst, alternative phase. Growing up in a Christian household, he spent his for- mative years in Texas before moving to Chattanooga,

Tennessee as a teenager in high school. “A very import- ant part of my life was in Texas, and then also a very important part of my life was in Chattanooga, because it was really split down the middle,” he says. “High school is like, the biggest deal ever. And elementary and mid- dle school are the biggest deal ever,” he says. While moving at such a key age was hard, jxdn says it “wasn’t

that crazy”. He grew up in the church and sang in the choir before getting into plays like Mary Poppins and Cinderella in high school. He loved music that “really used people’s voices”, like church music and Michael Jackson. “I was really young and I didn’t have much of an idea of what I liked. I really wanted attention growing up and I wanted to be appreciated and accepted so I just listened to what everyone else listened to,” he says.

It wasn’t until his senior year that he stumbled upon Juice WRLD. He continues to admire and evangelize about the late rapper, producer and singer: “I still listen to Juice WRLD to this day. My music choices or interests kind of broadened more than I ever thought they would when I moved to LA, and really the root of everything was Juice WRLD. I’d say that’s the main thing I listen to. I just realized that I really love good music. And Juice WRLD hits every time where it needs to and that’s really good music. I’ll always love him, rest in peace. He lit- erally changed my life. He gave me a purpose by being vulnerable in his music. So I love him forever,” he says. Like Juice WRLD, jxdn hopes to influence the mental health of his fans through his music.

If those are his influences, why pop punk now? “I didn’t listen to any pop punk bands growing up. That just wasn’t a thing where I’m from,” he says. After mov- ing to LA, he “worked backwards like crazy”, listening to as much of the genre he missed out on as he could. “But now I couldn’t even imagine a world without pop punk,” he says, which is understandable, considering one of its biggest icons changed his life forever. “I had a lot of background in music, I just never had a chance to hone those skills and turn it into something I love,” he says. “Everything I did before that was just because it seemed like an opportunity rather than like a passion of mine.” 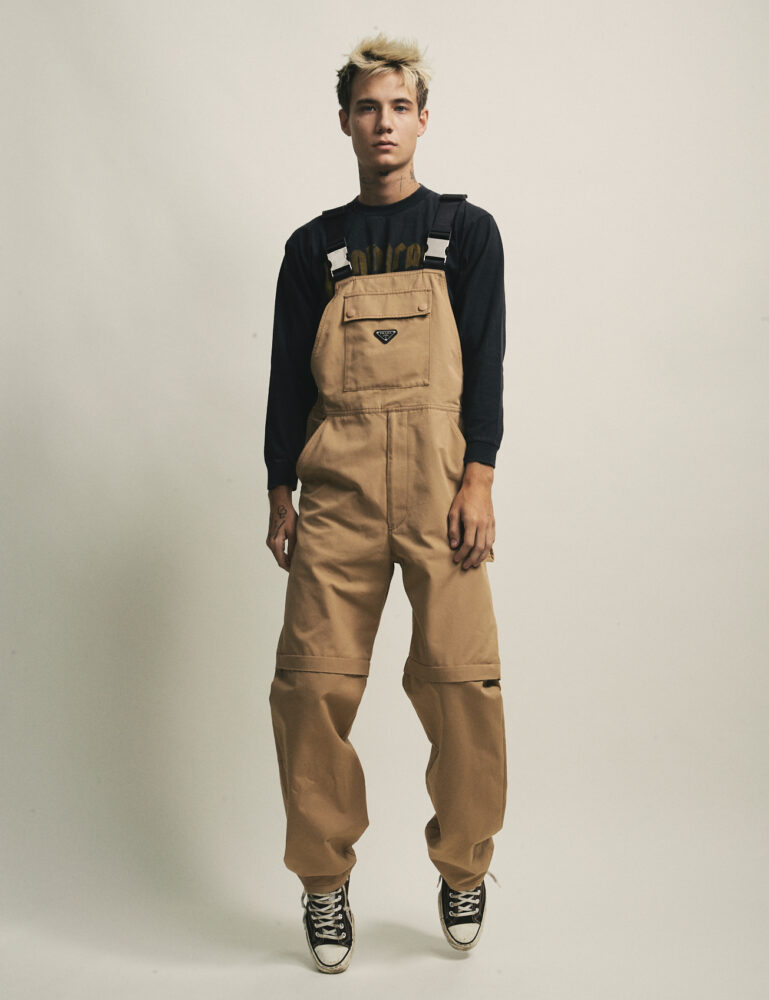 After graduating from high school, jxdn immediately moved to LA. “My mom was devastated. She was not happy whatsoever, until she realized that I was actually doing something that I loved,” he says. Getting her on board wasn’t too hard. Now she comes out to party with him, he adds. When jxdn first arrived in LA, he says, “I was actually homeless for like six months. I just couch hopped between my friends’ houses.” He quickly elaborates before anyone can feel too sorry for him: “Luckily I had friends that were really wealthy but I still had a lot of pressure.” After a few months he found a house and learned to adjust and pay his rent initially via TikTok. He moved into the Sway House within eight months of being in LA.

Struggling with the move, jxdn had to keep the faith that his career was going to work out: “I think it happened because I expected it to. It’s a weird dynamic because it’s not like it’s a lottery ticket, but there’s just a certain energy around that idea of like, you can’t have something unless you really expect it to happen, you know?” he says. His lottery ticket, so to speak, came in the form of Travis Barker: “Travis does really always keep an eye out for something new, something that could grow into something bigger. I’m just blessed that he saw that in me,” he says.

The recently released Tell Me About Tomorrow is his first full-length record. The album features nota le artists including Machine Gun Kelly, Travis Barker, and iann dior. It also credits The Used and Blink 182 on “Think About Me” and “A Wasted Year” for the tracks’ similarities to music by both of those bands. The pop punk presence is strong, and was noted by positive reviews in Nylon, SPIN, Vulture Magazine and MTV News. It was also noted in a less positive review. Pitchfork wrote, “despite Hossler’s outsized online persona, the record tells us nothing about who he is, only who he wants to emulate.” I ask him whether, considering his background and his candor about not having a background in the scene, he worries about being taken seriously: “It’s getting a lot easier. I think a lot of people are taking me seriously after seeing Lollapalooza,” he says. 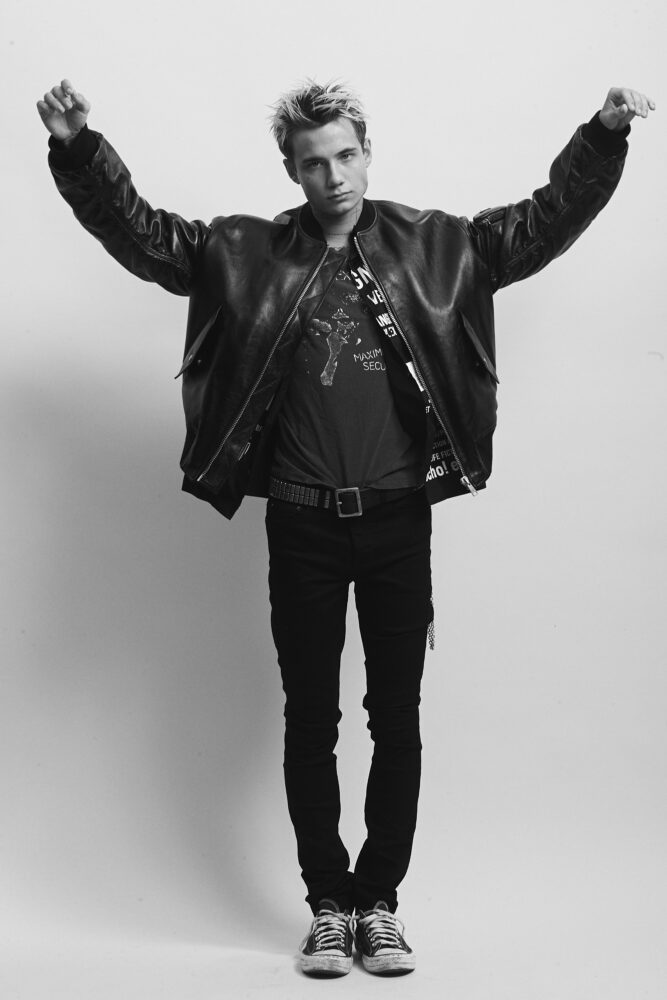 Performing and connecting with his fans, for jxdn, seems to be the biggest goal. “Before, I was obviously insecure about, is it going to happen? But after perform- ing in front of people and seeing the actual response and having 35,000 people come and jump in front of me, I don’t have any doubts about where I’m headed or how I’m taken seriously,” he says. “I’m just here to play music and I think people are starting to get that. I don’t have

an ulterior motive of like, ‘oh, I want to be this guy.’ I really just want to make music and I think people appre- ciate that now.” As time goes on, says jxdn, “fans are getting more and more into it and more connected and more appreciative of me, and it’s just the best feeling ever.” He just got nominated for an MTV VMA, and he thinks a win would affirm his authenticity: “If I were to win, that would be the funniest thing ever because that just means that I really deserve to win because my fans went crazy.”

After he releases the deluxe edition of Tell Me About Tomorrow, featuring new tracks that are “insane” and “so amazing”, jxdn is thinking about what’s next. He says that he wants to get it “through people’s heads” that pop punk isn’t the only thing he can do: “I just love good music, and I just love genre bending,” he says. He’s hoping, above all, to break it into the main- stream after his brief flirtation with pop punk. “I want everyone to hear that I want to change genres. I want to make alternative-based top 10 pop radio. I’m trying to change stuff,” he says. For that, he wants to bring in a pop heavyweight: “I have a couple songs that I’d really love to have someone really talented hop on, like Justin Bieber, I love him,” he says. “I’m not going to take an opportunity for granted, and I’m going to take my music which fits completely in alternative and make it pop radio. That’s my goal for you and for everyone to understand. That’s what I want to do: change pop radio.” 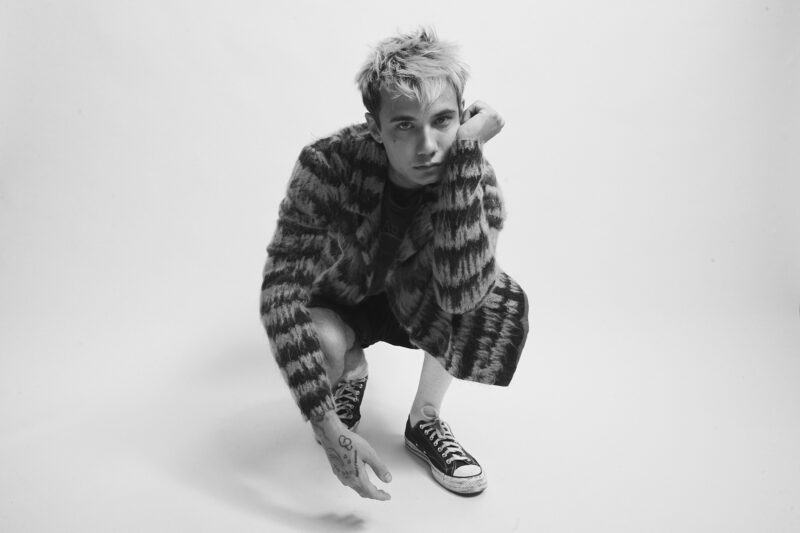 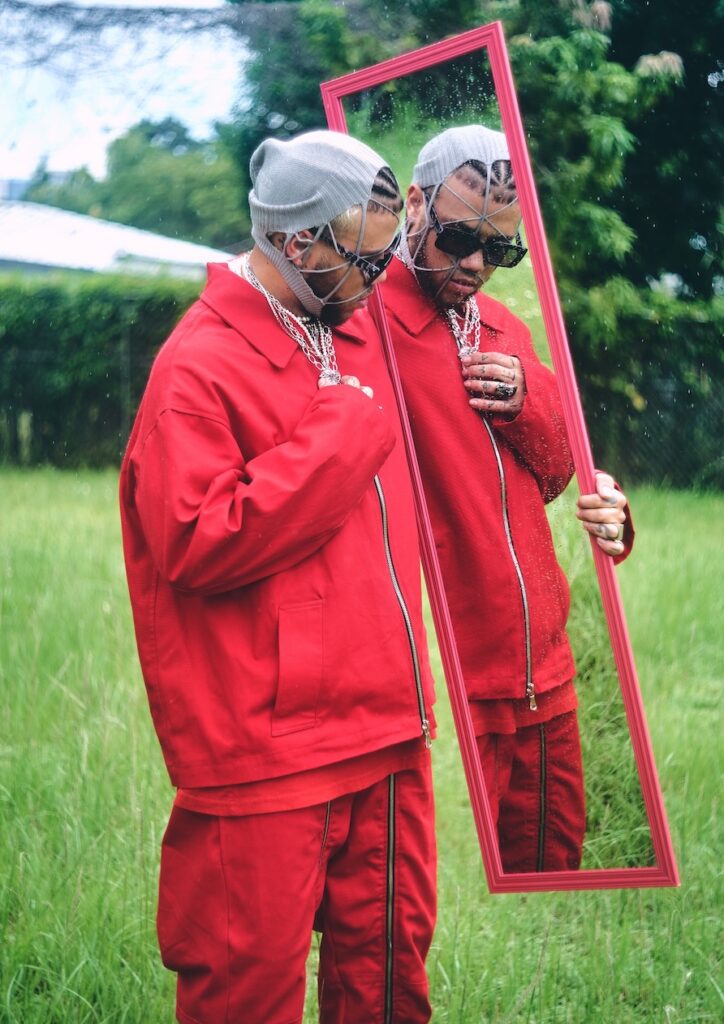 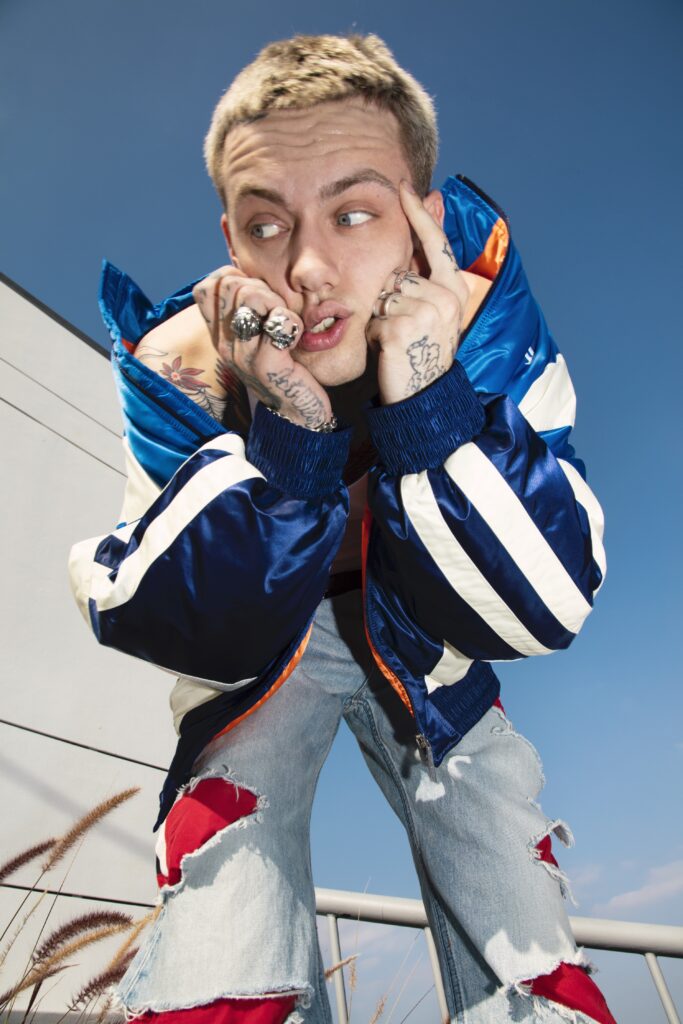 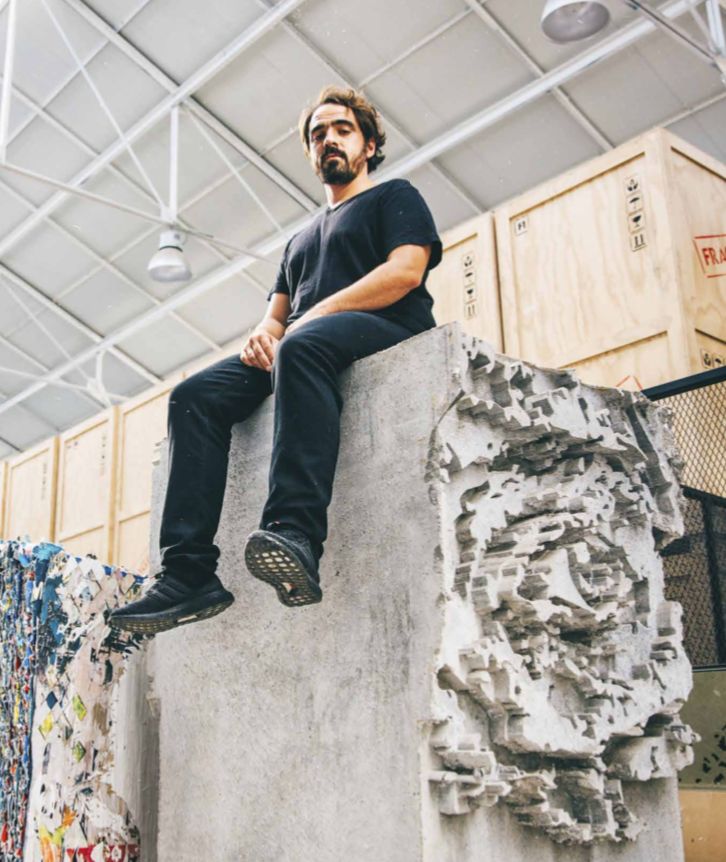